Seek simplicity, and distrust it.

Everyone's an Idiot Some of the Time 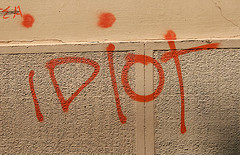 During high school I was a huge Dilbert fan, which is funny, because I had yet to see the inside of a cubicle. (I have since seen many.) At the height of its popularity, Scott Adams wrote a full-length book, The Dilbert Principle, which dove a little bit deeper into his particular brand of IT workplace humor. Although sadly not regarded as a business-literature classic today, Adams included an anecdote that has stuck with me, and I wanted to share it here, if only so I know where to find it. It’s about being an idiot:

I proudly include myself in the idiot category. Idiocy in the modern age isn’t an all-encompassing, twenty-four-hour situation for most people. It’s a condition that everybody slips into many times a day. Life is just too complicated to be smart all the time.

The other day I brought my pager to the repair center because it wouldn’t work after I changed the battery. The repairman took the pager out of my hand, flipped open the battery door, turned the battery around, and handed the now functional pager back to me in one well-practiced motion. This took much of the joy out of my righteous indignation over the quality of their product. But the repairman seemed quite amused. And so did every other customer in the lobby.

On that day, in that situation, I was a complete idiot. Yet somehow I managed to operate a motor vehicle to the repair shop and back. It is a wondrous human characteristic to be able to slip into and out of idiocy many times a day without noticing the change or accidentally killing innocent bystanders in the process.

What I like about this quote is that it treats idiocy as a transient state, something that comes and goes, rather than the all-or-nothing label—“that person is an idiot”—that we often apply to others. It’s also a reminder to be humble: we’re all stupid sometimes.

Neal Stephenson’s Cryptonomicon makes a similar observation about the difference between the term that we use in English to describe a person who is tied to a particular habit or drug—we call them “addicts”—and the German term for soldiers who had become addicted to Morphine during World War II, morphiumsüchtig (morphine-seeking, or -seeky). The latter is an adjective that describes one aspect of a person; the former is a noun that replaces them.

Note that none of this applies when dealing with a genuine total moron.

UPDATE: A couple of commenters have pointed out that the morphiumsüchtig comparison may not make much sense. I’m including the Stephenson passage, from which I’ve cribbed much of the above commentary, in its original context, on the off chance that it illuminates more about his intent.

“I don’t like the word ‘addict’ because it has terrible connotations,” Root says one day, as they are sunning themselves on the afterdeck. “Instead of slapping a label on you, the Germans would describe you as ‘Morphiumsüchtig.’ The verb suchen means to seek. So that might be translated, loosely, as ‘morphine seeky’ or even more loosely as ‘morphine-seeking.’ I prefer ‘seeky’ because it means that you have an inclination to seek morphine.”

“What the fuck are you talking about?” Shaftoe says.

“Well, suppose you have a roof with a hole in it. That means it is a leaky roof. It’s leaky all the time—even if it’s not raining at the moment. But it’s only leaking when it happens to be raining. In the same way, morphine-seeky means that you always have this tendency to look for morphine, even if you are not looking for it at the moment. But I prefer both of them to ‘addict,’ because they are adjectives modifying Bobby Shaftoe instead of a noun that obliterates Bobby Shaftoe.”

Some thoughts on RubyConf India 2011